People tend to think Artificial Intelligence is a robot with
arms and legs that think like humans or like Skynet in the Terminator movies
bent on human destruction. But in the real world, AI is slowly gaining
acceptance as a crime fighting tool in the banking world.

An example of crime being committed is when HSBC Holdings
Plc prevented a $500 million central-bank heist. Their computer system did not
raise any red flag. It went under the radar transferring from Angola’s reserves
of an inactive account in London. It was a suburban bank branch teller who
first detected a $2 million transfer request. She subsequently declined the
transfer and a series of reviews unraveled the crime.

But that is just the tip of the iceberg, since then it has
been a cat and mouse game to catch the illegal transfers amounting to as much
as $2 trillion a year. The transfers are becoming more and more harder to
catch. Banks like Denmark’s Danske Bank A/S, Deutsche Bank AG, and others are
caught red handed on charges of illegal money schemes thus destroying the trust
of customers in handling their hard-earned savings.

Bank executives are forced to set up more stringent security
measures to thwart the illegal transactions. Setting aside at least 10% of
their budget to create surveillance teams to track suspicious activities. But
there is a better cost-effective way to track the activities.

However, bank computers are still using simple
know-your-customer (KYC) applications and still has a long way to go before
replacing a human.

There is a lot of barriers to hurdle for the AI to detect
illegal activities. It needs more pertinent data on the banks’ clients especially
in international borders. Tweaking the refinement of the data is critical.

Data sharing from other banks and law enforcement is also
crucial for the AI to catch the bad guys. Competition and overlapping
jurisdictions are some of the problem there is no data sharing. There should be
more sharing among banks, open communication with bank supervisors and one
European anti-money-laundering regulator to oversee the data.

However, information sharing between banks are far and few
in between and only if it is convenient to them. Banks tend to protect big
clients from probes from regulators and do not report suspicious activities
that they considered normal.  True honest
data is needed for the AI to stay ahead of the culprits.

Criminals are adept in changing their tactics to go
undetected in routing their money. Catching them requires to guess what their
next move will be. AI needs to cope with this.

Regulators with the help of U.S. Treasury Department’s
Financial Crimes Enforcement Network, jointly with the Federal Reserve and
other U.S. agencies are actively encouraging banks to pursue new technology to
prevent money laundering and offer clemency if they detect an illegal
transaction in their banking system. 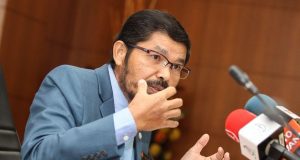