BRUSSELS Belgium: European Union countries accused the Russian armed forces of committing war crimes in Ukraine. But appeared unlikely to impose new sanctions on Moscow. Despite a clamor across Europe for those responsible for attacks on civilians to be held to account.

With civilian deaths mounting in the besieged port city of Mariupol. German Foreign Minister Annalena Baerbock highlighted the increase in Russian attacks on civilian infrastructure, including hospitals and theaters.

The “courts will have to decide, but for me, these are clearly war crimes,” Baerbock said.
EU foreign policy chief Josep Borrell said before he chaired a meeting of the 27-nation bloc’s foreign ministers in Brussels. That “what’s happening in Mariupol is a massive war crime. Destroying everything, bombarding and killing everybody in an indiscriminate manner. This is something awful.”

The encircled southern city on the Sea of Azov has seen some of the worst horrors of the war. Multiple attempts to evacuate residents from Mariupol have failed or only partly succeeded. City officials said at least 2,300 people have died in the siege, with some buried in mass graves.

Borrell underlined that “war also has the law.” The International Criminal Court in the Netherlands is gathering evidence about any possible war crimes in Ukraine. But Russia, like the United States, doesn’t recognize the tribunal’s jurisdiction.

Irish Foreign Minister Simon Coveney said his country is “certainly open to other mechanisms for accountability. In terms of the atrocities that are taking place in Ukraine right now.”
Coveney said Russia’s invasion of Ukraine is probably the first “war being played out on social media. Where people see images happening live, and they’re outraged by it.”

“This is driving a fury across the European Union within the public as to why can’t we stop this,” he told reporters. “They want people held to account for the decisions taken and the brutality that we have seen.”
The imposition of a new round of sanctions — asset freezes and travel bans — appears unlikely for now.

Notorious for their often slow handling of fast-moving international events. EU nations have rallied in just over three weeks since the invasion began on Feb. 24 to slap sanctions on 877 people. They include Russian President Vladimir Putin, senior ministers, and pro-Kremlin oligarchs.

A further 62 “entities” – companies, banks, airlines, and shipbuilders have also been hit in near-record time. But the issue of imposing restrictive measures on energy remains extremely sensitive. Given the dependence of many EU countries on supplies of Russian natural gas.

A group of countries led by Germany wants a pause on new measures for now. Amid concern about high energy prices and fears that Russia might halt gas exports to Europe. Some also want to save sanction ammunition for any new and major war atrocity, like the use of chemical weapons.

“We are doing everything to close loopholes in the sanctions” that have already been agreed, Baerbock said.
But Lithuanian Foreign Minister Gabrielius Landsbergis, whose country borders Russia and Belarus, warned against “sanctions fatigue.”

He said the EU must start thinking about what kind of attack by Russia would constitute a “red line” for tougher measures. The shelling of cities and civilians doesn’t appear to be enough to persuade some member countries. “but somewhere there, there has to be one.”

Landsbergis also said that Lithuania, Latvia, and Estonia need their defenses bolstered by partner countries.
“I think we need to see more equipment, and first of all the actual defense plans (for) the Baltic countries. That would reflect the changed strategic reality of the region.” 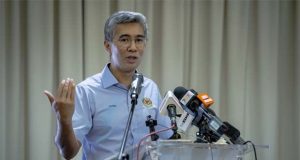