The high court of Turkey has
ruled that the government’s two-year-old ban on Wikipedia is unconstitutional.

Following a 10-6 vote in favor
of the multilingual online encyclopedia, the constitutional court ordered that
the ban shall immediately be lifted adding that it has violated the right to
freedom of expression.

The Turkish government blocked access to Wikipedia in 2017 due to the website’s entries citing the government officials’ involvement in oil trading with Islamic State and cooperation with terrorist organizations like Isis.

Wikipedia was regarded as a
part of a smear campaign against Turkey after it refused to remove the said
critical contents. Online
suppression is a persistent issue in the country especially during the height
of protests and terrorist attacks.

In May 2017, non- profit
organization Wikimedia Foundation which hosts the site, has petitioned the
highest court to challenge the access block.

Although it is not yet clear when access to Wikipedia will be restored in the country, the site’s founder Jimmy Wales already celebrated through a tweet that read “Welcome back, Turkey!” along with his photo taken during his recent trip to Istanbul.

The Turkish government has yet
to comment on the ruling.

To date, more than 100,000
websites and 95, 000 web pages have been banned and temporarily blocked in
Turkey. The Human Rights Watch said that the country is also the second leading
world jailer of media practitioners. 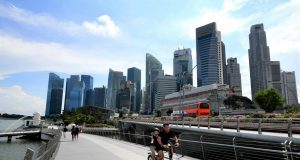 Muhammad Asim - May 22, 2021
0
Singapore: The economy of Singapore has been observed to increase at a much faster pace during the first quarter of the year...