Taiwan’s top military official Shen Yi-ming was among the three individuals reported missing after their helicopter made an emergency landing in northern Taipei.

In an interview, the defense ministry said that the aircraft had to make an emergency landing in the hilly part of the country’s capital because aviation authorities lost communication with it.

The ministry said it has sent a team to conduct search and rescue operations of the people aboard the Black Hawk helicopter, including Air Force General Shen.

Reports claim that Taiwan bought 60 UH-60M Black Hawk helicopters from the United States in 2010 but it was not established if the helicopter involved in the incident is among these.

A task force was also created to investigate the crash incident as it is still uncertain whether it was caused by mechanical failure or environmental issues.

“It had been raining in the mountains in the past few days, the mountain roads are muddy and very steep. We are racing against time,” said Operation Supervisor Chen Chung-chi.

Taiwan’s President Tsai Ing-wen, who is seeking re-election in the upcoming presidential and parliamentary elections set next week, canceled some of his scheduled campaign activities to give way for the intensified rescue operations.

Meanwhile, a fire department official in Taipei said that Shen had already been found alive, but the defense ministry has yet to confirm. 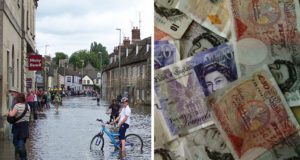 Merry Gel Sigui - December 20, 2019
0
Banks and insurers in the United Kingdom are critically horrified by the huge financial risks that climate change brings.