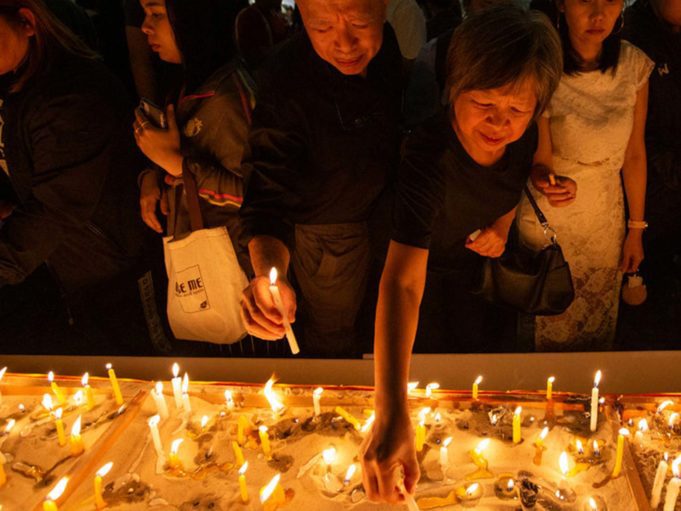 Thousands of Thais attended a vigil on Sunday for the 29 people who were shot dead by a rogue soldier over the weekend.

Held at the statue of the local heroine, Thao Suranari, in the city of Nakhon Ratchasima, the mourners lit candles and laid white flowers while the monks led the funeral ceremony.

Some attendees couldn’t help but shed tears for the victims of the country’s largest mass shooting which also left at least 57 wounded.

The shooter first killed his commanding officer, Col. Anantarote Krasae, at his residence before moving to an army base to steal guns and a vehicle. He then went to the Terminal 21 shopping center where he shot at people inside and outside the mall.

After almost 16 hours of siege, Thai authorities confirmed the death of Jakrapanth who was hunted through CCTV footage in the said shopping center.

It was reported that the gunman was angry over a land dispute with his commanding officer.

During the attack, the shooter allegedly posted a statement on his Facebook account that read “Death is inevitable for everyone.”

In an interview, Prime Minister Prayuth Chan-ocha defended why the operation took quite long and said that the authorities did their best to end the siege without compromising the safety of the civilians trapped inside the mall.

“I hope this is the only one and the last incident and that it never happens again. No one wants this to happen. It could be because of this person’s mental health in this particular moment,” he said.

The Thai government is continuously sending aids to the relatives of the killed victims while the wounded remain being treated in the hospital.

Merry Gel Sigui - April 1, 2020
0
The Philippine National Police-Criminal Investigation and Detection Group (CIDG) nabbed a Filipino-Chinese businessman for profiteering and hoarding of medical supplies amid the...