Home Uncategorized WHO: The world is facing nursing shortage as the coronavirus spreads

The Coronavirus-Disease 2019 (COVID-19) pandemic underlines the urgent need to reinforce the frontliners as the world needs nearly six million nurses, according to the World Health Organization (WHO).

Over 1.3 million people around the globe have now been infected by the deadly virus while more than 74,000 have been reported dead.

WHO and its partners Nursing Now and the International Council of Nurses (ICN) said that nurses play a crucial role in this battle against the coronavirus as they make up more than half of all health workers globally.

“Nurses are the backbone of any health system,” said WHO chief Tedros Adhanom Ghebreyesus noting that nurses should “get the support they need to keep the world healthy”.

Aside from scarcity, countries around the world are facing critical nursing shortages, leaving communities challenged with the growing health care demands as the pandemic worsens.

The experts said that the greatest gaps in nurses were in poorer countries like Africa, Southeast Asia, Middle East and some parts of South America. They claim that this is a result of migration wherein nurses from poor nations choose to work to wealthier countries who do not produce enough number of health workers to meet their own needs.

It was also revealed that there are only around 28 million nurses worldwide at present.

And at this time of the pandemic, many frontliners are hesitant to heed the call to treat patients with fears of high risk of exposure to the coronavirus.

“We have a very high proportion of healthcare workers not going to work because they’re afraid that they’ve been infected and that they can’t prove that they have not got the infection – or that they’ve had it, and they’re over it,” said Mary Watkins, the Alternate Chair of Nursing Now.

The health leaders are now calling for urgent investment in virus tests for healthcare workers. They also underscored the need for countries to increase the total number of nurse graduates by an average of 8% per year in order to avert the global shortage. 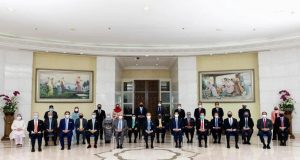 Muhammad Asim - August 20, 2021
0
KUALA LUMPUR: The Malaysian King put an end to the political quarrelling at a meeting held on Tuesday with his fellow party...