Hong Kong and China stocks helped up Asian shares despite mounting concerns about an impending economic slowdown and the speed at which the Federal Reserve is raising interest rates.

The biggest Asia-Pacific share index outside of Japan, MSCI, was up 0.19%, about to end a two-day losing trend. Hong Kong’s Hang Seng Index surged by over 2% while China’s stock market increased by 0.12%.

The rise in Chinese stocks followed some investors taking profits on Wednesday. After the government announced significant measures to loosen a strict anti-COVID policy that has severely harmed the second-largest economy in the world.

The S&P/ASX 200 index in Australia plummeted by 0.67%. The Nikkei in Japan dropped to close to a one-month low.

As traders analyzed data revealing that U.S. worker productivity recovered at a somewhat faster pace than previously believed in the third quarter. But the trend remained sluggish, keeping labor costs high, and the market generally struggled to find direction.

Investors’ willingness to take on risk has been curbed by growing concerns. That the US central bank may continue its extended rate-hike cycle in the aftermath of positive jobs and services sector reports.

The U.S. Treasury market stands out. Because it appears to be moving with little support. And Rob Carnell believes that this is what is driving the majority of the remainder of the market.

“Range trading may occur a little bit ahead of the FOMC meeting next week.”

The benchmark S&P 500 declined for the fifth straight session on Wednesday. And the tech-heavy Nasdaq also finished lower for the fourth day running.

When policymakers from the Fed, Bank of England, and European Central Bank meet next week. Many in the market feel that inflation is slowing and bond yields have peaked. Allowing central banks to start gradually raising interest rates.

On Wednesday, the Bank of Canada gave a hint that its record-tightening campaign was about to come to an end. As it increased the benchmark overnight interest rate to 4.25%, the highest level in 15 years, by 50 basis points.

The two-year U.S. Treasury yield, which normally changes in lockstep with forecasts for interest rates, increased 3.9 basis points to 4.296%.

After falling to their lowest point of the year on Thursday, oil prices stabilized in early Asian trading. 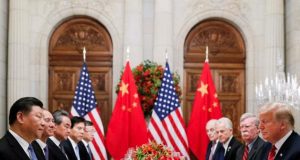 Muhammad Asim - June 28, 2021
0
At the beginning of last year, there was an extremely unlikely anomaly in global trade consciousness: China mentioned that it was promoting...