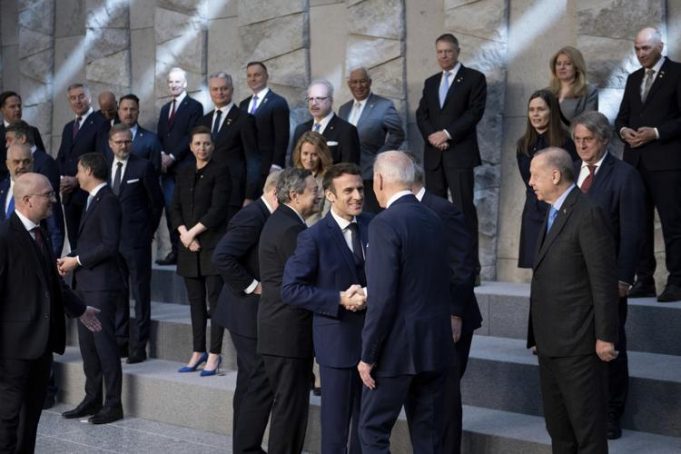 BRUSSELS Belgium: President Joe Biden and Western allies pledged new sanctions and humanitarian aid. In response to Vladimir Putin’s assault on Ukraine. But their offers fell short of the more robust military assistance that President Volodymyr Zelenskyy pleaded for in a pair of live-video appearances.

Biden also announced the U.S. would welcome up to 100,000 Ukrainian refugees, though he said many probably prefer to stay closer to home. And provide an additional $1 billion in food, medicine, water, and other supplies.

The Western leaders spent Thursday crafting the next steps to counter Russia’s month-old invasion. And huddling over how they might respond should Putin deploy chemical, biological, or even a nuclear weapon. They met in a trio of emergency summits that had them shuttling across Brussels. For back-to-back-to-back meetings of NATO, the Group of Seven industrialized nations, and the 27-member European Council.

Biden, in an early evening news conference after the meetings, warned that a chemical attack by Russia “would trigger a response in kind.”
Biden said.
“You’re asking whether NATO would cross. We’d make that decision at the time,”

Zelenskyy, while thankful for the newly promised help. Made clear to the Western allies he needed far more than they’re currently willing to give.

Biden said more aid was on its way. But the Western leaders were treading carefully so as not to further escalate the conflict beyond the borders of Ukraine.

“NATO has made a choice to support Ukraine in this war without going to war with Russia,” said French President Emmanuel Macron. “Therefore we have decided to intensify our ongoing work to prevent any escalation and to get organized in case there is an escalation.”

Poland and other eastern flank NATO countries are seeking clarity. On how the U.S. and European nations can assist in dealing with their growing concerns about Russian aggression as well as the refugee crisis. More than 3.5 million refugees have fled Ukraine in recent weeks, including more than 2 million to Poland.

A U.S. official, who requested anonymity to discuss internal deliberations, said.
Billions of dollars of military hardware have already been provided to Ukraine. Western nations were discussing the possibility of providing anti-ship weapons. Amid concerns that Russia will launch amphibious assaults along the Black Sea coast.

Biden said his top priority at Thursday’s meetings was to make certain that the West stayed on the same page in its response to Russian aggression against Ukraine.
“The single most important thing is for us to stay unified,” he said.

Finland announced it would send more military equipment to Ukraine, its second shipment in about three weeks. And Belgium announced it will add one billion euros to its defense budget in response to Russia’s invasion.

At the same time, Washington will expand its sanctions on Russia, targeting members of the country’s parliament along with defense contractors. The U.S. said it will also work with other Western nations to ensure gold reserves held by Russia’s central bank are subject to existing sanctions.

With Russia facing increasing international isolation, NATO Secretary-General Jens Stoltenberg also warned China against coming to Moscow’s rescue. He called on Beijing “to join the rest of the world and clearly condemn the brutal war against Ukraine and not support Russia.”

But Stoltenberg, too, made clear that the West had a “responsibility to prevent this conflict from becoming a full-fledged war in Europe.”
The possibility that Russia will use chemical or even nuclear weapons has been a grim topic of conversation in Brussels.

Stoltenberg said that NATO leaders agreed Thursday to send equipment to Ukraine to help protect it against a chemical weapons attack.

White House officials said that both the U.S. and NATO have been working on contingency planning should Russia deploy nonconventional weaponry. NATO has specially trained and equipped forces. If there should be such an attack against a member nation’s population, territory, or forces. Ukraine is not a member.

Stoltenberg said in a News interview. If Russia deployed chemical weapons, that would make “an unpredictable, dangerous situation even more dangerous and even more unpredictable.” He declined to comment about how the alliance might respond.

Both teams are conducting contingency planning for scenarios including Russia’s potential use of chemical or biological weapons. Targeting of U.S. security convoys in the region, disruptions to global food supply chains, and the growing refugee crisis.

The Russian invasion has spurred European nations to reconsider their military spending, and Stoltenberg opened the NATO summit by saying the alliance must “respond to a new security reality in Europe.”

Biden before departing for Europe on Wednesday said that the possibility of a chemical attack was a “real threat.” In addition, Kremlin spokesman Dmitry Peskov told CNN this week that Russia could consider using its nuclear weapons if it felt there was “an existential threat for our country.”