Hong Kong’s Chief Executive Carrie Lam said their city’s financial strength remains intact despite the month-long protests launched against the government that has also left some businesses caught in the middle.

The leader said that the lessons gained from the Asian financial crisis have helped in maintaining the stability of the Chinese-ruled city’s financial system. Thus, Hong Kong’s status as a global financial hub has not been undermined by pro-democracy demonstrations.

In her speech, she explained: The city’s “strengths and resilience, just like our financial systems, have not been undermined despite (the fact) that we experienced considerable social unrest and challenges.”

She furthered that the rigorous efforts of the government and its people will make Hong Kong unified again and thrive further.

To date, the protests in Hong Kong already marks its seventh month. This has prompted some investors to doubt about the city’s business confidence as malls and banks were damaged and vandalized during the previous violent clashes between the protesters and authorities.

Transvision Shipping’s business development manager Mohamed Hasan said the protests have diminished Hong Kong’s reputation as a safe business hub as some of their partners are now reluctant to visit the city.

“Our Chinese agents would still rather go to Macau or Shenzhen but not Hong Kong for meetings. They don’t feel safe here,” he said.

Lam reassured Hasan and all other delegates by citing e-commerce giant Alibaba Group Holding Ltd as part of listings in Hong Kong amid the economic recession.

She also added that numerous banking and insurer licenses have just been issued by the government recently. 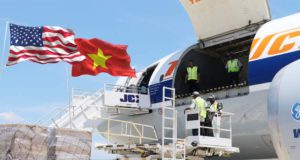 Vietnamese products see enormous demand in the US market

Merry Gel Sigui - April 4, 2020
0
Goods with ‘Made in Vietnam’ tags have become more popular in the United States as the world’s largest economy reduce its dependence...