HSBC bank is in trouble with the Chinese government after it was learned they turned over documents to the US government in its prosecution case against Meng Wanzhou, the chief financial officer of Huawei.
Liu Xiaoming, China’s ambassador to the UK, summoned John Flint, the ousted chief executive of the bank, to the Chinese embassy demanding answers as why they turnover information against Ms. Meng.

Ms. Meng was arrested in Canada on charges of bank and wire fraud by the US government, she is fighting the extradition case against her. It is also alleged that the Chinese telecommunications firm had business dealings with Iran in full knowledge of US sanctions against that country.

According to sources, Mr. Flint explained to the ambassador the bank had no choice in the matter to turn over the information against Ms. Meng in 2017. HSBC was previously fined $1.9bn for helping Mexican drug cartels for laundering dirty money. Hence, they are forced to comply.

With the bank’s plan to make China the central plank in its plan to generate additional revenue worth billions of dollars in mainland China in turmoil, China is displeased with HSBC. It could end up in country’s upcoming “unreliable entity” list, a measure in retaliation to the US restrictions in the trade wars.

Plus, the fact the recent Hongkong protests, where HSBC makes half its profit, is having a heavy effect on its expansion plans.

HSBC has more presence in China than any of its rival banks. There are more HSBC branches than the foreign banks and managed to be the first expat bank to have a majority share of a mainland securities corporation.

But Mark Tucker, HSBC’s chairman, countered it will not affect the bank’s alignment with the Chinese government’s vision of growth and prosperity. They are actively involved in big Chinese projects like the internationalisation of the renminbi, creating a technology-driven economic zone in the south-east, known in Beijing as the Greater Bay Area, and the Belt and Road Initiative, China’s global infrastructure drive.

To quell shareholders’ jitters, Manus Costello, an analyst at Autonomous, said the bank is consistent in getting the needed licenses to further its business in China. But with the recent developments, China might restrict HSBC in further participation in the Chinese financial markets.

HSBC is caught in the middle of the trade war between the US and China. They are walking an “apolitical line” where in one hand, trying to please China and on the hand, trying to follow its legal obligation to the US. 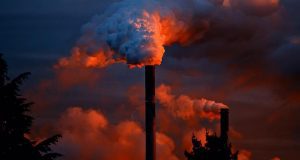 Ariel Antonio - April 2, 2022
0
While Rhode Island is trying to reduce greenhouse gas emissions and set an example for other states environmental officials said Friday that...