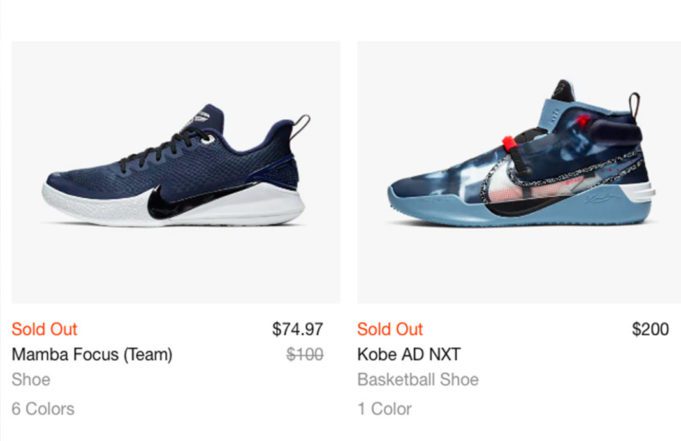 As thousands of fans worldwide mourn the loss of NBA legend Kobe Bryant; Lakers jerseys, Nike shoes and similar gears of the late superstar were sold out in online and physical stores.

Nike confirmed that it completely cleared out of Bryant’s merchandise and sneakers. It denied previous reports that it pulled out Kobe’s gears to prevent resellers from stockpiling on existing products and then retailing them at higher prices.

Buyers who are searching for Kobe-related items on Nike’s website are now directed to a page with the company’s statement about the tragic death of Kobe, his daughter Gianna and other passengers of the crashed plane.

Meanwhile, the Los Angeles Times’ Kobe Bryant special edition was also reportedly sold out on Monday. The items are said to be made available after at least two weeks and will be sold for $15.

A local store in Las Vegas which was interviewed by the media also shared that his Bryant jerseys were quickly bought minutes after the fatal helicopter crash was reported.

Media reports said that Bryant items are currently being resold with elevated costs at consignment platforms like StockX. From $200, the price of sneakers soared to $1,200 after the basketball star’s death.

Around 65,000 pieces of Bryant memorabilia were also listed on eBay including an autographed 1996 Topps Chrome Kobe Bryant rookie card worth $1 million.

With this, some stores take necessary measures to prevent people from making financial profit over Bryant’s death.

Jaysse Lopez, the owner of Urban Necessities online store, issued a letter to his consignors stating that they will not allow price changes on consigned Bryant items.

He assured that his company will revert the price of those items with increased value to their original listing amount.

“This kind of price gouging in the wake of a tragedy is not how I built my brand or how I need to make a dollar,” Lopez wrote in an Instagram post.

Fans who are still in search of basketball paraphernalia are advised to check out NBA’s online store which still offers the iconic purple and gold jerseys, commemorative plaques and a life-size removable wall decal as of January 28.