The Philippine Institute of Volcanology and Seismology (Phivolcs) said Monday morning that the Taal volcano could bring a “volcanic tsunami” if activities escalate.

On its website, the bureau said: “a volcanic tsunami may occur in caldera lakes when water is displaced by deformation of the lake floor caused by rising magma.”

A volcanic tsunami would accompany an eruption column of as much as 15 kilometers high and could bring floods, as explained.

They added that an Alert Level 5 might be raised within the next few days if the volcano remains unrested. Extreme hazards can be expected at Alert Level 5.

As of 5:00 AM on Monday, more than 23, 000 Filipino residents of Batangas province have been evacuated by the Philippine Army’s 2nd Infantry Division as Taal continues to spew ash.

The Government sent military trucks beginning Sunday night to help residents flee from danger zones around Taal Lake, including the most affected towns of Balete, Laurel, San Nicolas, Talisay, and part of
Lipa and Tanauan City.

As of writing, no casualties have been officially reported yet. 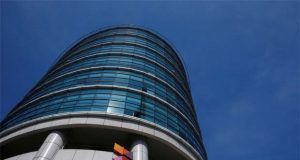