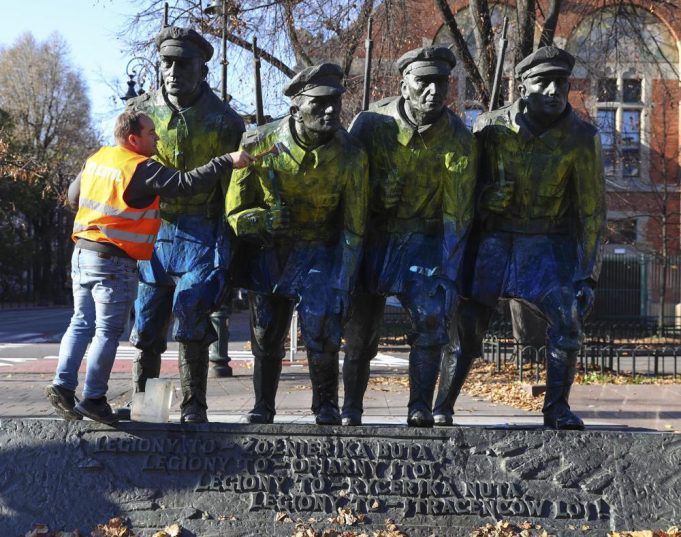 WARSAW, Poland: Days before Poland’s Independence Day in November, vandals painted the blue-and-yellow colors of the Ukrainian flag on monuments in Krakow. The vandalism, took place as Russia massed troops near Ukraine’s border. Looked as if Ukrainians were defacing memorials to Polish national heroes.

Yet some clues suggested otherwise.
The flag’s colors were reversed, with the yellow on top of the blue and one offensive message in an unnatural mix of Russian and Ukrainian. Though prosecutors are still investigating. Polish and Ukrainian authorities believe it was most likely a Russian-inspired attempt to trigger ethnic hostility between Ukrainians and Poles.

Polish and Ukrainian authorities have for years accused Russia of trying to provoke hostility. Between their neighboring nations as part of a broader effort to divide and destabilize the West. And the concerns have gained greater urgency since Russia invaded Ukraine.

Poland and Ukraine are neighbors and allies. But they share a difficult history of oppression and bloodshed, and those historical traumas sometimes rise to the surface.
Poland has also accepted large numbers of Ukrainian refugees. Creating fears that could become another wedge issue that Russia could exploit.

“The Russian efforts to sow divisions between the Poles and Ukrainians. Particularly by means of exploiting historical issues, are as old as time,” said Stanislaw Zaryn, the spokesman for Poland’s security services.
“Russia has redoubled them since the war began,” he said. “And they are more dangerous now because the war is going on and it can affect more people than before.”

Reacting to the November incident, the Ukrainian Embassy in Warsaw immediately denounced it. As “shameful” and “a provocation aimed at harming the good neighborly relations between Ukraine and Poland.”

More than 2.5 million Ukrainian refugees have arrived in Poland since the war began. And while some move on to other countries more than half have remained. Poles have reacted with an outpouring of help and goodwill. And the government has extended to the Ukrainians the same rights to education and health care that Poles have.

Never Again, an anti-racism association in Poland has documented several attempts to stoke aversion to the Ukrainian refugees. And even to openly justify Russian President Vladimir Putin’s invasion. In some cases, those behind the messages are far-right Polish activists. Or politicians with pro-Kremlin views, according to a report the organization published Thursday.

“These groups do not enjoy widespread public support, but they do their best to make Poles and Ukrainians quarrel. Spread hateful content, conspiracy theories, and false information, primarily in the internet space,” it said.

Larysa Lacko, an expert on countering disinformation at NATO, said Russia is known to exploit refugees as a wedge issue. Because it touches on the economy, race, and other sensitive issues. And that she has also observed Russian “disinformation talking about historical grievances.”

Western Ukraine was once under Polish rule, with Ukrainians largely subservient to a Polish landowning class.
Resentments erupted in ethnic bloodshed during World War II. When the Ukrainian Insurgent Army, a nationalist military formation, slaughtered tens of thousands of Poles in the Nazi-occupied Polish regions of Volhynia and Eastern Galicia.

Even after the war, Poland was forced to live under Moscow’s oppressive control for the decades of the Cold War.
Some Poles, especially those who lived through the war, remember those times and carry a lingering hostility toward both Russians and Ukrainians.

One false claim Polish authorities say Russians are spreading is that Poland seeks to reclaim Lviv and other territories in western Ukraine that once was Polish. “Those claims are untrue,” the Polish Foreign Ministry said in a series of tweets seeking to debunk false claims. “Poland will never accept the annexation of any territory belonging to an independent state.”

Another is that Poland, a NATO ally hosting thousands of U.S. troops, is working to set the West against Russia.
That claim was made recently by former Russian president Dmitry Medvedev, the current deputy chairman of the Russian security council.

At a moment of huge solidarity in Poland and elsewhere with Ukrainians, disinformation is limited in its impact, argued Lacko, the NATO expert working to counter disinformation.

“Given the atrocities on the ground, it’s harder to fall into these sorts of traps,” she said.
But officials in Poland say they have to remain on guard. Especially if the number of refugees grows, creating the potential for more social anxieties that can be exploited.