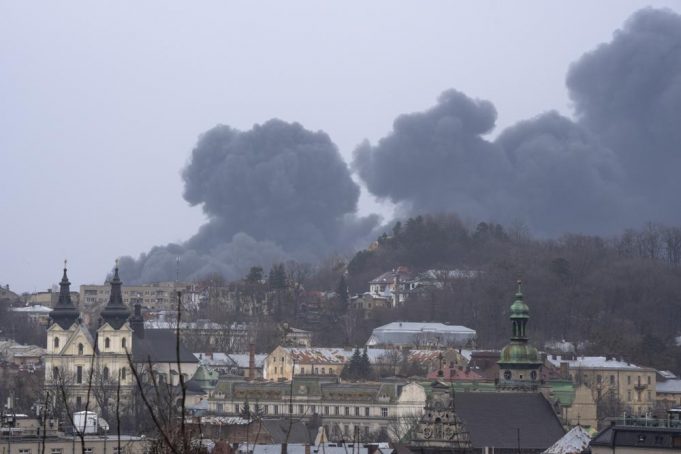 WASHINGTON USA: Russian forces in Ukraine seem to have shifted their focus from a ground offensive aimed at Kyiv the capital. Instead, prioritize what Moscow calls liberation of the contested Donbas region. In the country’s industrial east, suggesting a new phase of the war.

It appears too early to know where this will lead. Has President Vladimir Putin scaled back his ambitions in search of a way out of the war? The dug-in defensive positions taken recently by some Russian forces near Kyiv indicate a recognition of the surprisingly stout Ukrainian resistance.

On the other hand, Russian forces might be aiming to continue the war with a narrower focus. Not necessarily as an endgame but as a way of regrouping from early failures. And using the Donbas as a new starting point, one U.S. analyst said.

Putin’s forces are under great strain in many parts of the country. The United States and other countries are accelerating their transfer of arms and supplies to Ukraine. In recent days, U.S. officials have said they see evidence of Ukrainian defenders going on the offensive in a limited way in some areas. Earlier this week they managed to attack a large Russian ship in port on the Black Sea coast.

Putting a positive face on it all, the deputy chief of the Russian general staff said. His forces had largely achieved the “main objectives” of the first phase of what Moscow calls a “special military operation” in Ukraine. Col. Gen. Sergei Rudskoi said Russian forces had “considerably reduced” the combat power of the Ukrainian military. And as a result, Russian troops could “focus on the main efforts to achieve the main goal, the liberation of Donbas.”

In apparent response to Rudskoi, Ukrainian President Volodymyr Zelenskyy appealed anew to Russia to negotiate an end to the war. But pointedly Ukraine would not agree to give up any of its territories for the sake of peace.
“The territorial integrity of Ukraine should be guaranteed,” he said in his nighttime video address to the nation. “That is, the conditions must be fair, for the Ukrainian people will not accept them otherwise.”

A month of fighting has left Russian forces stalled in much of the country, including on their paths toward Kyiv. A senior U.S. defense official said Russian ground forces in the past few days have shown little interest in moving on to Kyiv. Though they are keeping up airstrikes on the capital.

“At least for the moment, they don’t appear to want to pursue Kyiv as aggressively, or frankly at all. They are focused on the Donbas,” the official said, speaking on condition of anonymity to discuss internal U.S. assessments of the war.

From the start of the invasion on Feb. 24, Putin has been vague in publicly describing his military goals in Ukraine. He said the purpose was to “demilitarize” and “denazify” the government as well as “liberate” the Donbas. A portion of which has been under Russian-backed separatist control since 2014. Putin arrayed more than 150,000 troops on Ukraine’s borders and then pushed them on numerous approaches toward diverse objectives. Rather than concentrating on a single strategic goal like Kyiv or the Donbas.

In the four weeks since Ukrainians have put up a far tougher resistance than Putin likely expected. And Russian forces have been slowed by numerous problems, including weak logistics and perhaps flagging morale.

French President Emmanuel Macron, speaking in Brussels, said “it’s too soon to say” whether the Russians have changed their approach. “It shows very clearly that in any case, a (Russian) operation led simultaneously on all sides was thwarted by the heroic resistance of the Ukrainian people. That’s what we see for several days.”

Stephen Biddle, a professor of international and public affairs at Columbia University who has studied U.S. wars in Iraq, Afghanistan, and elsewhere, said it’s difficult to decipher Moscow’s intent from the statement.

“It’s plausible that they’re basically trying to ratchet their perceived war aims down to something they’ve already accomplished,” he said. Referring to their existing hold on parts of the Donbas. It’s also possible, that they’ve decided they began the war with the wrong approach. With combat forces spread too thin across too many parts of the country. In that case, they might now try to regroup with a central focus on the Donbas. And make that the new starting point for an offensive they could later broaden.

Loren Thompson, a defense analyst at the Lexington Institute, a Washington think tank, said Putin might be recalibrating.
“Moscow may be looking for a way out of its Ukraine quagmire. Focusing its military goals on control of the Donbas could be a way of scaling back without admitting defeat.”

Denied the quick victory he apparently had expected before launching the invasion, Putin is left with stark choices. How and where to replenish his spent ground forces. And whether to attack the flow of Western arms to Ukrainian defenders. A big question concerning that second choice: at what cost if he should escalate or widen the war?

The senior U.S official said it appears Putin intends to draw on Russian forces in Georgia as reinforcements in Ukraine. The official said it was unclear where and in what numbers they might enter Ukraine.

Russian shortcomings in Ukraine might be the biggest shock of the war so far. After two decades of modernization and professionalization, Putin’s forces have proved to be ill-prepared, poorly coordinated, and surprisingly stoppable. The extent of Russian troop losses is not known in detail. Although NATO estimates that 7,000 to 15,000 have died in the first four weeks. Potentially as many as Russia lost in a decade of war in Afghanistan.

Robert Gates, the former CIA director, and defense secretary said, Putin “has got to be stunningly disappointed” in his military’s performance.
“Here we are in Ukraine seeing conscripts not knowing why they’re there. Not being very well trained, and just huge problems with command and control, and incredibly lousy tactics,” Gates said.

“It is likely that successful counterattacks by Ukraine will disrupt the ability of Russian forces. To reorganize and resume their own offensive towards Kyiv,” Smeath said in a brief statement.

Not long before Putin kicked off his war, some U.S. military officials believed that he could capture Kyiv in short order, perhaps just a few days. And that he might break the Ukrainian military within a couple of weeks.