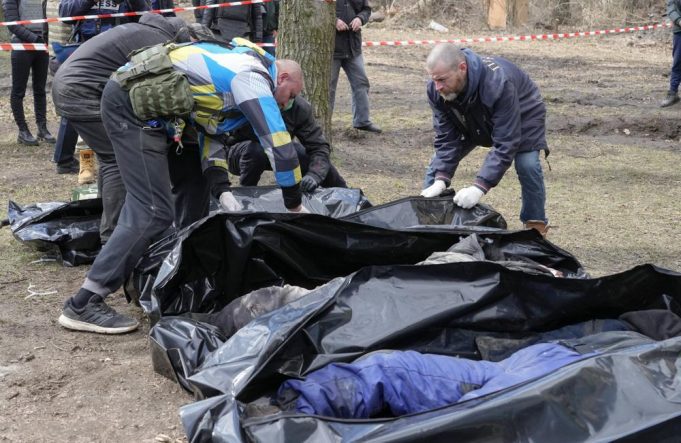 BUCHA, Ukraine: Moscow faced global revulsion and accusations of war crimes. After Russian pullout from the outskirts of Kyiv revealed streets strewn with corpses of what appeared to be civilians. Some of whom had seemingly been killed at close range.

The grisly images of battered bodies left out in the open or hastily buried. Led to calls for tougher sanctions against the Kremlin, namely a cutoff of fuel imports from Russia. Germany reacted by expelling 40 Russian diplomats, and Lithuania threw out its Russian ambassador.

Ukrainian President Volodymyr Zelenskyy left the capital, Kyiv. For his first reported trip since the war began nearly six weeks ago. To see for himself what he called the “genocide” and “war crimes” in the town of Bucha, the site of some of the horrors.

“Dead people have been found in barrels, basements, strangled, tortured,” said Zelenskyy. He again called on Russia to move quickly to negotiate an end to the war.

In Bucha, northwest of Kyiv, bodies wrapped in black plastic was piled on one end of a mass grave in a churchyard. Many of the victims had been shot in cars or killed in explosions trying to flee the city. And with the morgue full and the cemetery impossible to reach, it was the only place to keep the dead, Father Andrii Galvin said.

Tanya Nedashkivs’ka said she buried her husband in a garden outside their apartment building. After he was detained by Russian troops and was found dead with two others in a stairwell.

“This guy is brutal, and what’s happening in Bucha is outrageous,” said Biden, who also promised to increase sanctions against Moscow.

Ukrainian officials said the bodies of 410 civilians were found in towns around Kyiv that were recaptured from Russian forces in recent days.

In Bucha, the Journalists team saw 21 bodies, including a group of nine in civilian clothes who appeared to have been shot at close range. At least two had their hands tied behind their backs. A bag of groceries was spilled by one of the dead.

The full extent of the bloodshed in the Kyiv area has yet to emerge. By all accounts, the horrors in the shattered southern port city of Mariupol are likely to be far worse.

“This is a war of murders, a lot of blood. A lot of civilians are dying,” said Natalia Svitlova, a refugee from Dnipro in eastern Ukraine who fled to Poland. “I don’t understand why this is possible in the 21st century and why no one can stop it.”

Russia withdrew many of its forces from the capital area in recent days after being thwarted in its bid to swiftly capture Kyiv. It has instead poured troops and mercenaries into the country’s east in a stepped-up bid to gain control of the Donbas. The largely Russian-speaking industrial region includes Mariupol. Which has seen some of the heaviest fighting and worst sufferings of the war.

About two-thirds of the Russian troops around Kyiv have now left and are either in Belarus or on their way there. Probably getting more supplies and reinforcements, said a senior U.S. defense official. Who spoke on condition of anonymity to discuss an intelligence assessment.

Russian forces also appear to be repositioning artillery and troops to try to take the city of Izyum. Which lies on a key route to the Donbas, the official said.

Dmytro Zhyvystskyy, governor of Ukraine’s northern Sumy Region, said Russian troops who took over the area on the way toward Kyiv had also retreated back to Russia. With Ukrainian forces capturing small groups left behind.

European allies, though united in outrage over the aftermath outside Kyiv, appeared split on how to respond.
Poland, which is on Ukraine’s border and has taken in large numbers of refugees. Angrily singled out France and Germany for not taking tougher action and urged Europe to quickly wean itself off Russian energy. But Germany said it would stick with a more gradual approach of phasing out coal and oil imports over the next several months.

Western and Ukrainian leaders have accused Russia of war crimes. Before, the International Criminal Court’s prosecutor has already opened an investigation. But the latest reports ratcheted up the condemnation.

French President Emmanuel Macron said there is “clear evidence of war crimes” in Bucha that demand new punitive measures.
“I’m in favor of a new round of sanctions and in particular on coal and gasoline. We need to act,” he said on France-Inter radio.

But Poland’s prime minister described Russia under Putin as a “totalitarian-fascist state” and called for actions “that will finally break Putin’s war machine.”

“Would you negotiate with Hitler, with Stalin, with Pol Pot?” Mateusz Morawiecki asked of Macron.

In announcing Germany’s expulsion of Russian diplomats, Foreign Minister Annalena Baerbock said. The images from Bucha reveal the “unbelievable brutality of the Russian leadership and those who follow its propaganda.”

“We must fear similar images from many other places occupied by Russian troops in Ukraine,” she added.

The U.S. and its allies have sought to punish Russia for the invasion by imposing sweeping sanctions. But fear further harm to the global economy, which is still recovering from the pandemic. Europe is in a particular bind since it gets 40% of its gas and 25% of its oil from Russia.

Putin’s Feb. 24 invasion has left thousands of people dead and forced more than 4 million Ukrainians to flee their country.

“The horrors that we’ve seen in Bucha are just the tip of the iceberg of all the crimes that have been committed by the Russian army on the territory of Ukraine so far,” Ukrainian Foreign Minister Dmytro Kuleba said.

“And I can tell you without exaggeration but with great sorrow that the situation in Mariupol is much worse. Compared to what we’ve seen in Bucha and other cities, towns, and villages nearby Kyiv.” JAMES ROBERTO - December 8, 2022
0
Hong Kong and China stocks helped up Asian shares despite mounting concerns about an impending economic slowdown and the speed at which...